WHICH IS SAFER, SKYDIVING OR SCUBA DIVING?

WHICH IS SAFER, SKYDIVING OR SCUBA DIVING?

There were 21 fatal skydiving accidents in the US in 2015, which equates to 0.006 fatalities in every 1,000 jumps, according to data from the United States Parachute Association (USPA). In scuba diving in the same year, there were 0.164 deaths per 1,000 dives, as stated in the Diving Medicine for Scuba Divers journal (2015). This means, statistically speaking, skydiving is safer than scuba diving.

That said, the safety (and perceived safety) of a sport is far more complex than statistics might suggest. For people taking part in skydiving or scuba diving, there are always inherent risks and many rewards.

Here, we explore a little more about the safety of both sports. 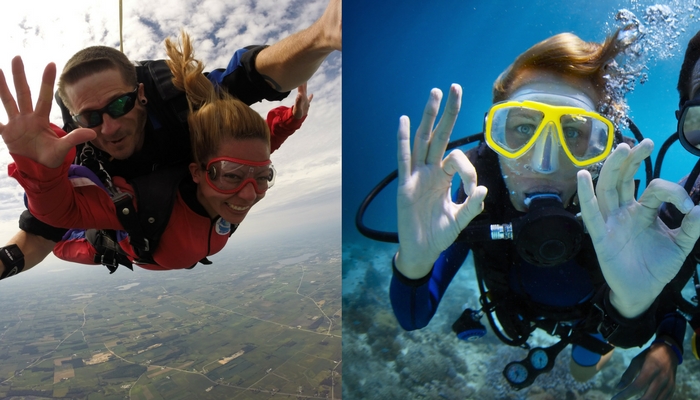 Much of the technological advances in the safety of skydiving is due to the military’s use of parachutes in the early 20th century. While risky jumps were considered the norm in the early days, the military invested heavily in improving safety levels, propelling the sport into a much safer realm than ever before.

Today, skydiving equipment includes a number of advanced backup systems to aid the skydiver. Aside from always jumping with two parachutes (a main and reserve), the development of a device called an AAD (automatic activation device) has saved thousands of lives. For example, in the event that a skydiver is unable to deploy their own parachute, the AAD will deploy the reserve parachute automatically.

Read Post  Tandem Skydiving: Everything You Need to Know Then, there’s the training that goes into learning to skydive. Each new skydiver is taught in a very regimented manner, where processes and sequences are essential. All of this has contributed to making skydiving the safest it’s ever been and transforming it from an extreme sport to mainstream.

Scuba diving is a hugely popular sport which, like skydiving, has evolved a lot as it’s popularity has grown.

Like skydiving, an investment in equipment has helped to improve safety rates. For example, scuba divers today use dive computers instead of tables. These computers are used to calculate the time required between dives and the depth to which one can dive safely.

The key in both sports is to understand the risk and to manage it appropriately. This means, for those in a position to move the sport forward, investments in technology and design are important. For those people who participate in the sport for the first time, an understanding that there are risks – and what the risks are – is essential.

When you jump with Wisconsin Skydiving Center, you’ll receive a full briefing during which we outline all of the potential risks, teach you about the equipment, and train you how to execute a safe skydive.

Learn more about tandem skydiving for the first time with us, or if you have questions, please contact a member of our team.

Why Are Small Planes More Vulnerable than Large Planes? Flying is statistically the safest way to travel. However, you may wonder, ‘It’s better to go on a private jet instead of a commercial jet, right?’ You may enjoy more luxury, but there are more risks. So, we’ll explain why large planes are safer than small planes in this article.

Yes. There is a Link

Although safety and size are completely different things, there is still a link that proves small planes to be more vulnerable than large planes.

Firstly, think of strong crosswinds affecting different types of planes. An aircraft as small as the Cessna 172 can easily spiral out of control if it’s exposed to very strong winds. Although a commercial airliner can still be unstable, the damage will be smaller.

Loss of Engines Can Be Troublesome

What happens if an airliner loses an engine? It diverts with no trouble at all because they have multiple engines!

However, many private airframes only have one engine due to the low amount of thrust necessary to fly it. What’s worse, they usually use piston engines, which are much less reliable than jets.

Therefore, if just a single engine fails in this type of aircraft, the plane will essentially turn into a glider and only have one chance to land safely on an airport.

In fact, smaller planes generally have fewer backups and safety features, so the probabilities of displaying incorrect data and having unusual conditions skyrocket on these aircrafts.

One of the most common causes of plane crashes is pilot error. Unfortunately, according to USA Today, pilots of private planes only have as little as 60-75 flight hours of training on average. That little training significantly raises the chances of a pilot getting wrong.

Read Post  WHAT DOES IT TAKE TO BECOME A CERTIFIED SKYDIVER?

Other than an increased rate of mistakes, pilot errors of small planes are more perilous. It requires much less energy to spiral a light airplane out of control than to do so on an airliner. Remember that small planes are lighter, which is one reason why they are much more dangerous than larger planes.

Moreover, there is still one factor that increases the rate of pilot error, and it’s the attitude. A lot of flights by small planes are only recreational flying and only involves one or two people. Meanwhile, a commercial airliner pilot is responsible for the lives of hundreds of people and the airline’s reputation.

Although this is an unavoidable parameter, the risk can be resolved with more training, and possibly, some experience on commercial planes.

So, we explained why are small planes more vulnerable than large planes on this webpage. We hope you can look at the issue even more in the references because the article is not enough.