Skydiving vs bungee jumping – which is better? We know your fourth-grade teacher talked a lot about how there are no dumb questions. But ya know what? It’s a dumb question. Skydiving and bungee jumping are both awesome sports in their own right, and totally, completely, entirely, 100%, unmistakably different. If you’re an adventurous soul, you owe it to yourself to try both!

Bungee jumping and skydiving are both sports. They’re also adventure “taster” activities. That means you can approach both activities in two ways: as a one-time, boundary-pushing photo opportunity, or an actual-factual athletic pursuit that requires training and dedication. How much dedication? Well: sports skydivers often count their jumps in the thousands. Often, sport bungee jumpers will, too.

Both have regulatory bodies of oversight checking on operators

As adventurous as they are, bungee jumping and skydiving are both very safety-first when organized by a reputable operation. It’s fair to say that both sports fight unjustly-held reputations for recklessness. But both have managed to survive as legal sporting pursuits because of the efforts of smart, ethical practitioners who simply want to keep doing what they love.

Both are global, but skydiving is the larger industry of the two, so its regulatory organizations are distributed all over the globe. These — like the United States Parachute Association in the US, the British Parachute Association in the UK, the Fédération Française de Parachutisme in France, and dozens more around the world — set high standards for training, equipment, and procedures that have been exactingly designed to keep skydivers as safe as possible. (The statistical safety of skydiving has long surpassed the safety of driving in a car.)

Bungee jumping has the North America Bungee Association here in the USA, as well as a few other organizations, generally located in countries where the sport has the biggest active populations and bungee jumping sites (such as New Zealand, South Africa, China, and Switzerland).

Both have the potential to be life-changing positive experiences

It doesn’t matter if you’re standing on the edge of a platform poking out from a bridge or you’re getting your first mouthfuls of 14,000′ wind: your brain is full of chemicals that are very, very good for you. Both of those views are mind-blowing — and both experiences are sure to leave you with lasting daydream fodder.

At Skydive Long Island, we tend to prefer our jaw-dropping skyline, but HECK NAW do we flatly turn down the view from a nice, tall crane every once in a while.

Both are vibrant communities full of flat-out amazing people

Skydiving? Bungee jumping? People who dig this stuff are a fun pack of folks indeed! If you get into one sport, the other or both, you’ll find that you’ll be plugged into a multinational, thriving community of many thousands of cool humans. (Note that sport bungee jumping is a significantly smaller community, but by no means an absent one!)

Wherever in the world gravity-hungry athletes go, they’ll connect with others who love the same heart-pounding stuff — whether that’s jumping out of an airplane, or jumping off things with an elastic cord clasped to their ankles. Communities around sports like ours are tight, supportive, affectionate and really fun to be around.

So: You’ll know what to say the next time someone asks “What’s better, skydiving or bungee jumping?” You’ll be savvy! Both are great, and it’s entirely a matter of preference which you start with. Once you’ve done both, we want to hear your opinion. So reserve your jump at Skydive Long Island and let’s get started!

Best bungee jumping near me in Long Island, NY 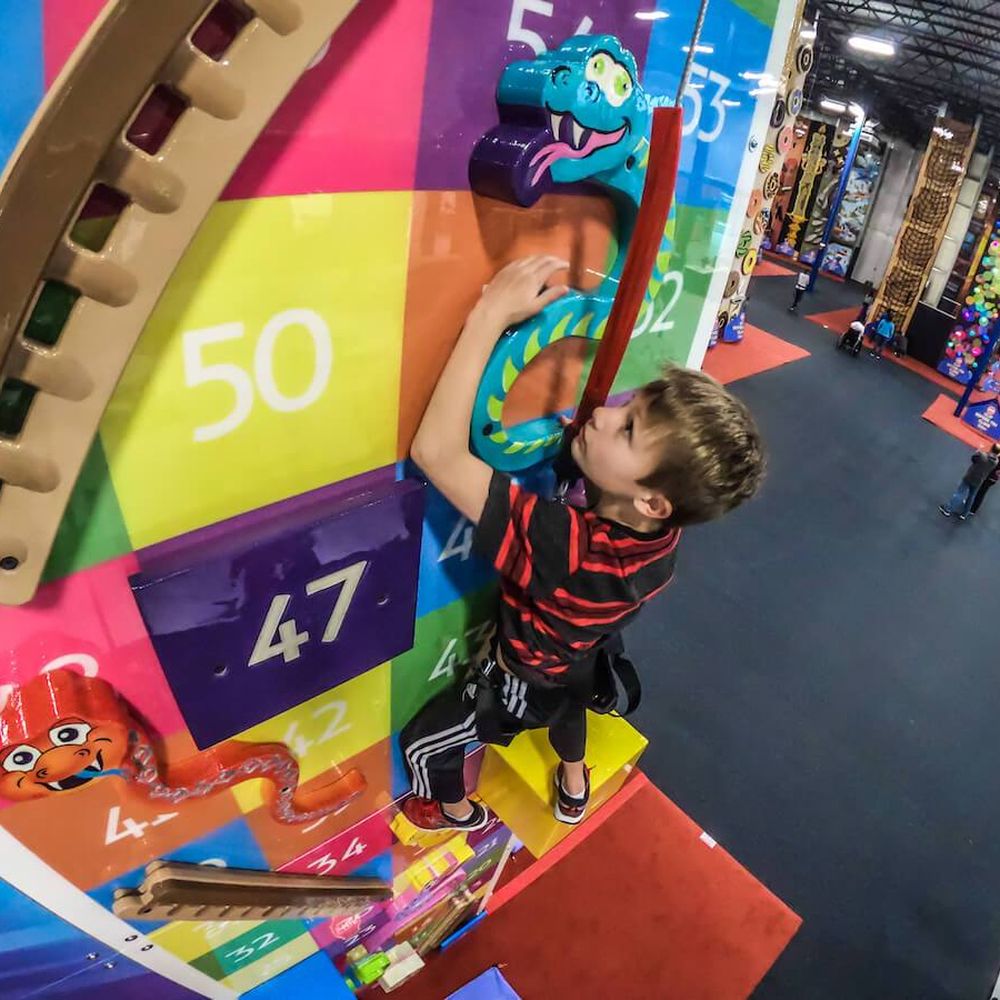 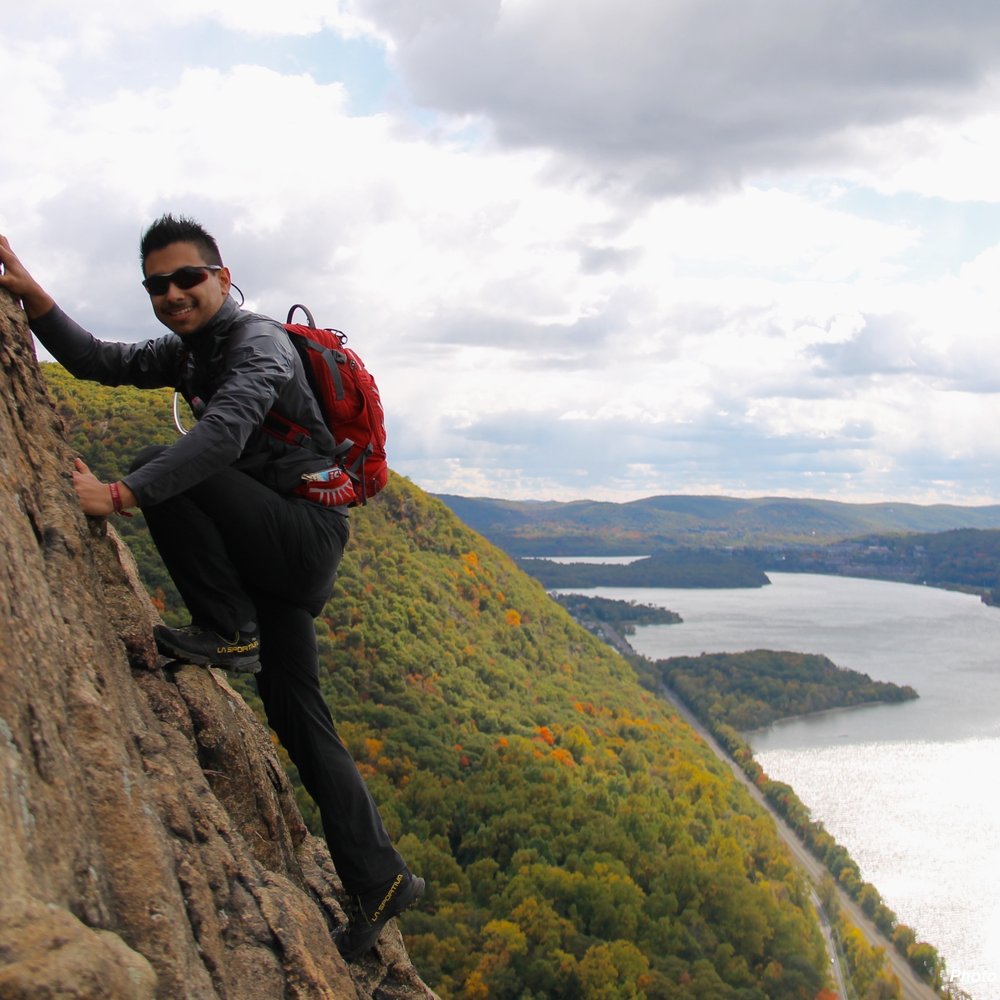 “Went tandem hang gliding from over 2000ft, actually I went over 4000 which was amazing, but that’s another story. Pulled by an ultralight airplane, I got to…” more 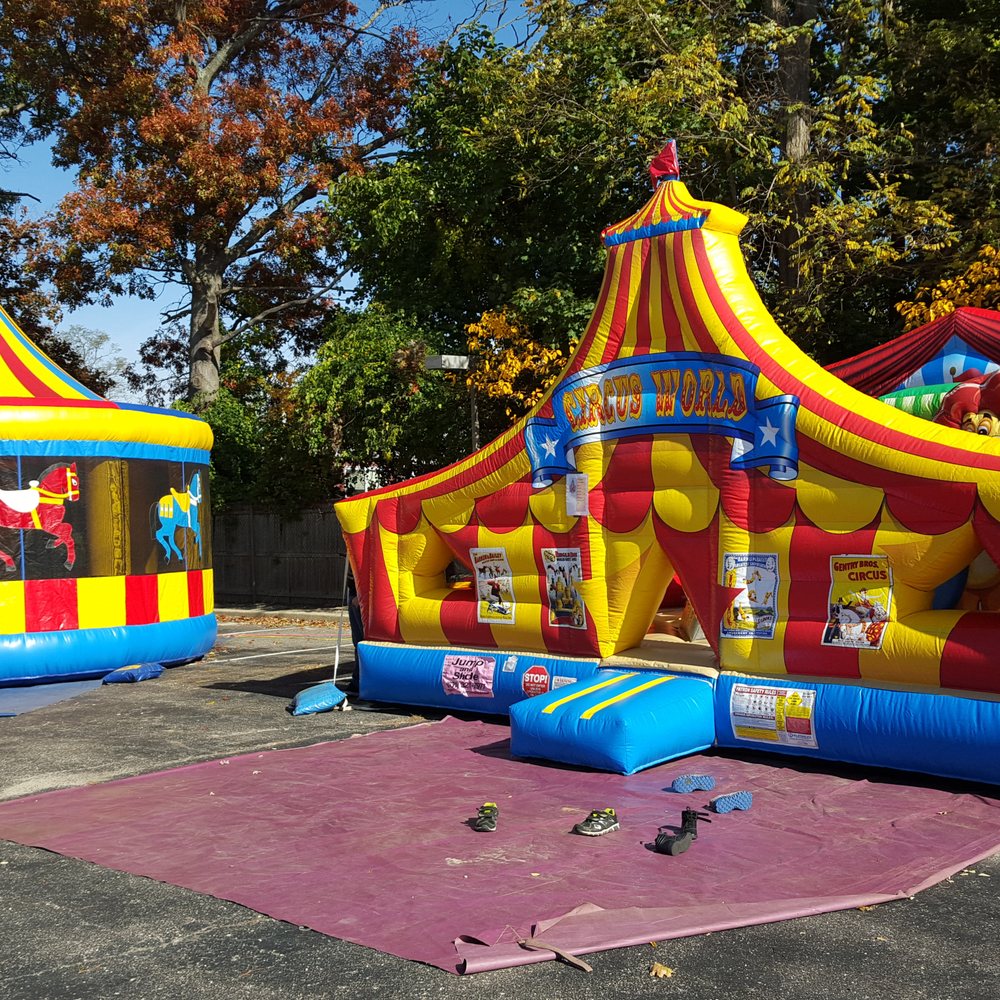 “I recommend this company to anyone that wants to make a family party the workers came on time for the set up, everything very nicely explain , we rented…” more 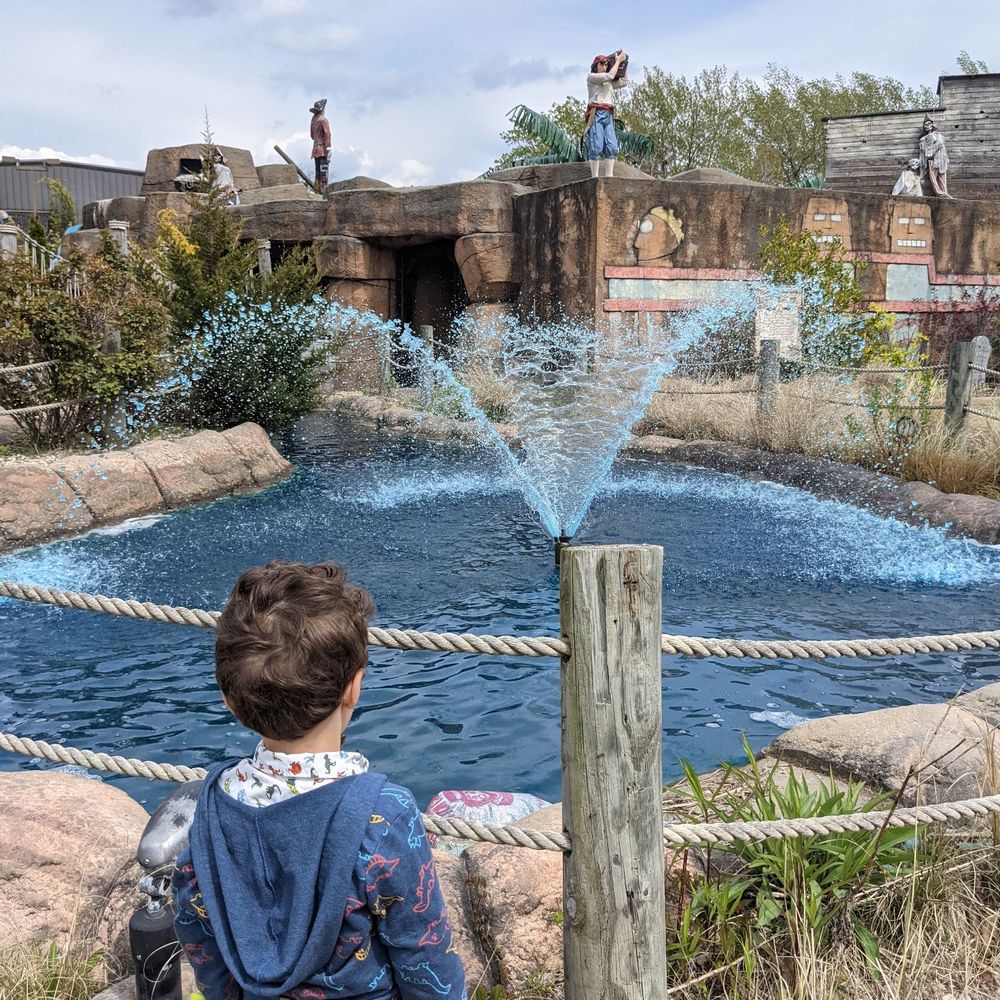 Adding a business to Yelp is always free.

What can be bad about that. Ever tried bungee jumping?

What are people saying about bungee jumping in Long Island, NY?

This is a review for bungee jumping in Long Island, NY:

“Went tandem hang gliding from over 2000ft, actually I went over 4000 which was amazing, but that’s another story. Pulled by an ultralight airplane, I got to release it, and steer the hang glider a little bit, over the New Hampshire mountains. Saw so many ski resorts, and such beautiful shades of blue, shadows, hills and clouds, so pretty! Kind of scary hanging from a kite, really want to learn how to do this myself, but then I have to start with running starts from the ground lol. Xcelerated Adventures was awesome. Chase, the leader and tour guide was awesome, very cool guy, so chill and professional but easy to talk to and fun! And it was great to meet other cool people from around the NYC area that like adventures. :)”

Namiseom or Nami Island is a half-moon shaped island located in Chuncheon, Gangwon Province, South Korea. It is mostly famous for being the shooting location for a lot of Korean dramas, so its quite a popular day trip to take from Seoul!

On top of having such a beautiful nature scene within the island, and visitors can even zip line into Nami Island! The area where the zip line isn’t exactly inside Nami Island, but across the river, closer to Seoul. This area has water activities and many fun extreme sports, and the entrance for the zip line.

While around the Nami island area, we had the opportunity to go bungee jumping off the 55-meter tower (equivalent to more than 18-story building). Bungee jumping was one of our main goals while we were in Korea and we had it planned from the beginning, so knowing what you want and planning first would be good beforehand. Everything is pretty expensive, so make sure to save money and know that it will hurt your wallet. The bungee jumping alone was KRW 40,000 (~$40).

Getting there takes around 2 hours to 3 hours depending on how you get there. Of course, the taxi is the fastest way but can be pricy since it is so far away. Thankfully, we had a Korean person in our group who helped navigate how to get there. We went on a bus, train and then a short taxi ride. I wish I can try to say what lines, and how much the cost was, but I was kinda just floating in the group most of the time haha.

It seems that there are multiple ways to get to Nami Island, but the one I put below seems the most convenient with the less amount of transfers and walking. I set starting from Seoul Station, since that’s the main station in Seoul, but feel free to see whats the best way to get there from your destination from your google maps.

There’s also a roundtrip Nami Island Shuttle Bus From Seoul that is run by Klook that can pick you up and drop you off from either Hongik University Station Exit 4, Myeongdong Station Exit 2 or Dongdaemun History & Culture Park Station Exit 10.

When you arrive in the area, you are greeted by a huge green structure and that’s where you will be jumping off from! You might recognize this area since its often seen on a lot of Korean Reality TV!

Read Post  Why does it make sense to multiply bungee jump

If you go with a group a good idea is to split the group in half to bungee jump, so the other people can sit by benches right by the lake. We were a group of 5 so first 3 of us went, and then once we can back, the other 2 went. This was very good for us since it gave us an opportunity to record each other jump.

When the time was ready, I walked up the stairs of the tower and at the top, the workers weight me and secured me in the waist so I am ready to jump off. After making sure we were safe, they led us to the very top to jump off. The staff leads me to the area to jump off one by one and they do a countdown. They don’t push you off or anything, and you just have to jump off your self. There were multiple times I saw people go all the way to the top and end up giving up and going back down.

The moment I jumped off it felt as if my heart jumped out my body and I was legitimately scared, but the moment I had the first bounce, it felt instantly safe and assured me that I was doing alright, and my scared scream turned into a laugher.

After bungee jumping, we got Dakkalbi from a restaurant right next to the tower and was so good, so I recommend checking out the food and cafes around the area after your adrenaline rush.

Overall, I really thought this experience is fun, and hopefully, next time if I have a chance to do something like this again, I can jump off of something even higher. This is a great height for a person bungee jumping for the first time, like me. I have a vlog all about my visit to Nami Island and bungee jumping, so check it out if you want!

Support me on my Patreon!

Any questions/concerns/help about anything or Nami Island?

Join the Sidekick tier on Patreon and be able to guarantee private messaging me on my discord or Instagram for basic consultations on anything at any time! It can range from basic trip planning, k-pop concert advice, work away, or study abroad advice!

Some Useful Sources when traveling to Korea: