If you’re looking for adrenaline in superlatives, you should check out the world’s tallest swing, called Big Rush. Nope, it’s not in the adventure capital of the world, it’s in Durban, South Africa, at the Moses Mabhida Stadium.

What is Big Rush Durban?

Big Rush is a rope swing over the Moses Mabhida Stadium in Durban. It’s not just your regular big swing though, it’s the tallest swing in the world.

Before you know it, you’re in an 80 meter (~288 foot) free fall towards the soccer field in Moses Mabhida Stadium, with your scream stuck in your throat. Take it from me, Big Rush is an aptly chosen name for this big swing! Birthe ready for her jump You’ve got quite a nice view from up here

How does the Big Rush Swing work?

You’re asked to be at the

Big Rush Stadium Shop about 20 minutes before the time slot you booked. That’ll give you enough time to sign an indemnity waiver form, be fitted with a full body harness, and go through an short briefing of what’s about to happen.

On the hour, you’ll be lead to the bottom of one of the arches over the Moses Mabhida Stadium. They’ll attach you to a safety line for the ascent of the 352 steps to the top of the arch. Hold tight to that bottle of water you got in the shop, ’cause you’ll need it.

A Jump Crew will be waiting for you at the top. The last one to arrive has to jump first. The rest can sit on the steps to catch their breath while waiting. Unfortunately you can’t really see the others jump, but you can enjoy the view over Durban! Climbing down the ladder to the jumping platform Don’t look down here if you’re afraid of heights

When it’s your turn, make some funny faces for the camera before descending the short ladder to the jump platform. The Jump Master will be waiting there to attach you to the main jump line. He’ll ask you if you’re ready for the Big Rush and count you down.

If you didn’t change your mind (you still can), they’ll be pulling you back up to the jump platform a few seconds later. You go back down the way you came up, drop off your harness at the shop and wait for the after movie to make its way to your inbox. It’s over in no time, but it’s definitely a Big Rush!

Did you know? The Moses Mabhida Stadium was built for the FIFA World Cup in 2010. Its iconic “arch of triumph” (from which you’ll be swinging) makes it into a stunning landmark for Durban.

We recommend booking a time slot for the Moses Mabhida Stadium Swing online through the Big Rush website, but you can just head to the

Big Rush Stadium Shop as well. Do note they don’t accept cash in the shop. One time slot equals one hour, which can accommodate 10 people.

The tallest swing in the world costs R695 per person. If you want your personal video and photos as a souvenir from your Big Rush, you have to pay another R200. You can take a look at the preview before you decide.

You can leave your valuables and loose items in free lockers at the Big Rush Stadium Shop. You are however allowed to take your cell phone with you for a selfie at the top. The Jump Crew will hold onto it while you swing.

This marker marks the spot of the Big Rush Stadium Shop. You can park you car for free at the

car park northeast of the stadium. You’ll be ascending the stairs to the top of one the stadium arches

Our Experience at Big Rush Durban

On a rainy morning in Kestell Brecht booked our Big Rush experience for 15:00 later that day. Durban was at that moment still 350 km (~217 miles) away, about a 4 hour drive.

An hour into the drive, we got a phone call from Big Rush, asking if we could come by earlier. They needed to clear the stadium at 15:00 because of a soccer practice for the big game tomorrow. We agreed to being there at 13:40, 20 minutes before the 14:00 time slot. Real daredevils don’t hold the rope with their hands Brecht swinging above the pitch

Not much later it became clear it would be a race against the clock to get at Big Rush in time. Due to road works and a car accident, traffic had come to a standstill on the N3. Juggling Waze and Google Maps for the quickest route, we barely made it in time.

The 8 others in our group were already more or less ready to jump when we came running in at the Big Rush Stadium Shop, so it all felt quite rushed. We only had time for a quick run to the toilet and signing of the “Big Rush is not responsible if I die today” forms.

On the way to the stairs it became clear to us that you were allowed to bring your phone, while we thought we had to leave all loose items in the lockers at the shop. Too bad, because now there was no selfie for us at the top, and no panoramas of the awesome view over Durban.

Read Post  The best places in the world to bungee jump

We were number 7 and 8 in line, so had a bit of a wait before it was our turn to jump. It was a nice sunny day, however, so we just enjoyed the view. Unfortunately we weren’t really able to see each other jump so we were pretty excited for the videos. The quality is a little bit disappointing though. Would have loved to brag about our jump in high definition!

Check out Birthe’s Big Rush video right here:
(the jump itself starts around 0:54)

However, despite all that it definitely was a Big Rush swinging from the arch over Moses Mabhida Stadium and we loved the urban adrenaline high! We had a great experience with the Big Rush staff as well.

If you’re an adrenaline junkie like us (or like Brecht at least), you’ll definitely enjoy this rope swing in Durban! If you’re in no rush for a Big Rush, the Moses Mabhida Stadium offers plenty of other wonderful activities. You can find more information on their website. Don’t worry though, you’re in safe hands. The staff is very friendly and competent!

Did you already receive a certificate for doing the Big Rush in Durban or any other adventure activities in South Africa or the world? We’d love to read about your experiences (and be inspired by them) in the comments! 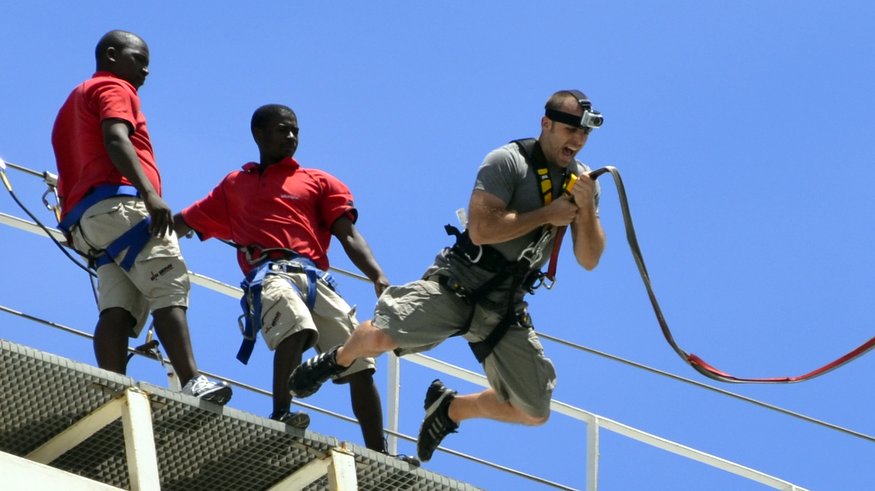 It was our last day in South Africa and we had just left the Victoria Street Market with bags of newly purchased goods in hand. We had just one more stop to make before heading back to the Oyster Box Hotel.

We knew that South Africa Tourism had something awesome up their sleeves for us before we said our goodbye to South Africa, but we really weren’t sure what our last surprise would be.

How could they possibly top our first surprise? I mean, seriously, a helicopter tour over Cape Town. C’mon!

Our driver was making all sorts of lefts and rights but as soon as we started to get closer to Moses Mabhida Stadium, I had a weird feeling that we might be doing something extreme.

It turns out I was dead on. We were here at Moses Mabhida Stadium to take the leap and experience the ride of our lives on the BIG RUSH!

What is the Big Rush?

The Big Rush Urban Adrenaline Swing is not only the world’s only stadium swing. It’s also the Guinness Book of World Records Tallest Swing in the World at a staggering 347 ft!

If that wasn’t enough to excite you adrenaline junkies out there, then how about this cool fact. The initial drop is an insanity-laced 196 ft free fall before swinging across the World Cup Stadium field in a 721-foot arc!

Let’s Get Suited Up!

Once you sign your life away, it’s time to empty out those pockets of yours. Nobody wants their valuables spread across the Stadium, so lock them up! Next, it’s time to slip in your harness.

Read Post  Jumping on Trampoline While Pregnant: Can it Induce Labor? 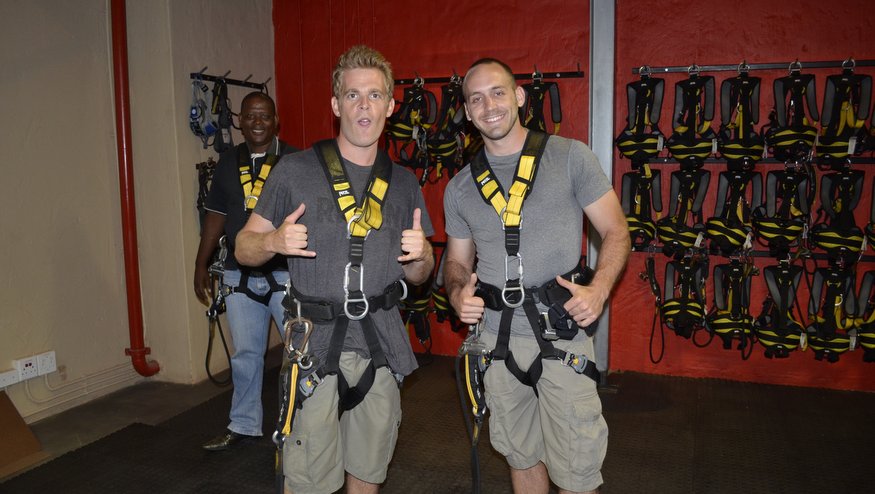 We all know that practice makes perfect, but is it really necessary that we jump off this two foot stage?

After two mock jumps, we head on outside and get our first look at the absolutely astonishing Moses Mabhida Stadium. 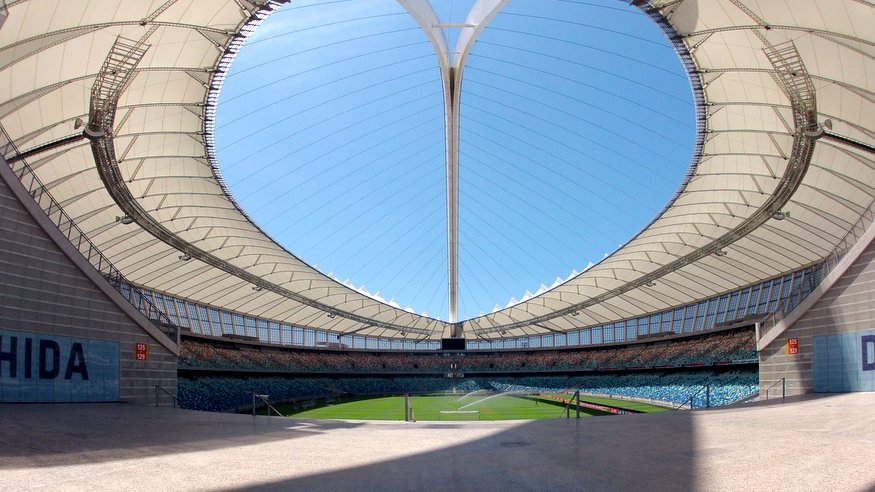 In case you didn’t know, this stadium was built solely for the FIFA World Cup games that were hosted here in South Africa back in 2010. Now a days, the stadium is used for both local soccer and cricket matches as well as concerts and other major live events.

The arch above the stadium is home to both the Big Rush Adrenaline Swing and the Sky Car.

After taking in the view from inside Moses Mabhida Stadium, it was time for us to start our ascent to the top of the arch. Three hundred and fifty stairs later, we had arrived at the launch point. It was time for us to choose who was going to jump first before anyone could answer, I immediately raised my hand and waved it around like a child. I didn’t come all the way up for here nothing, I’m here to find out what this swing is all about!

Walking out on to the launch platform was something else. I’m 350 feet in the air looking over the entire stadium thinking… “Is this for real?

The staffs instructions were mumbled as the wind was blowing and it was extremely hard to understand what they were saying. Thank god we did those “mock jumps” earlier or I would have been screwed!

I didn’t have much time to think about the jump, nor did I want it. It was time to take the leap. 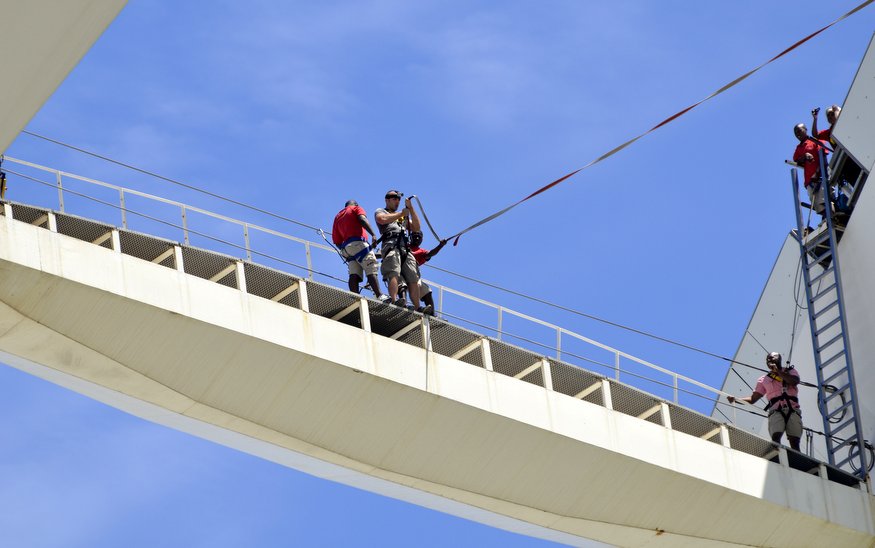 I’m three inches from the platform and I’m already starting to scream at the top of my lungs.

Okay so the photos really don’t do it justice. If you want to really experience what it’s like to take the leap, don’t miss the video below!

I’ve been skydiving, zip-lining, cliff jumping, volcano boarding, and I’ve even raced dune buggies through the desert. Still, I have to admit, The Big Rush was hands down one of the craziest things I’ve ever done.

If you’re ever in Durban, do yourself a favor and give this adrenaline rush a shot. You won’t regret it!

If the photos in this article don’t do this swing justice, this video below sure will. Watch and listen to me scream!