How Many Jumps Before Skydiving Solo: A Quick Explanation

How Many Jumps Before Solo Skydiving?

We have a goal here at Jumptown: To help people achieve their dream of human flight. You’ve probably noticed that we’ve designed a totally unique AFF Camp program in order to do just that. (For the uninitiated: AFF is a solo skydiving training method, described in this little presentation (second tab from the left) on the United States Parachuting Association website.) Doing a camp offers significant savings over the traditional AFF program (bonus!). Plus, it provides a focused, intensive learning environment from which we feel students greatly benefit.

When you read about the camp, it sounds kinda wild–you show up at 8 a.m. on a Thursday morning and you’re meant to be jumping solo by Sunday. You’re probably wondering how that works, exactly. How many jumps do you have to do before you’re skydiving solo?

As it turns out, that answer isn’t the easiest to pin down. It depends on you, your unique progression and how you define a “solo skydive.”

1. WHAT IS SOLO SKYDIVING?

If you’re defining “solo skydiving” as the act of getting out of a plane wearing your very own parachute, then congratulations! You’ll be “solo skydiving” on your very first AFF (Accelerated Freefall) jump, the Category A. As you can see in that linked video, as an AFF student you’ll be accompanied by two instructors holding onto you, but you won’t be clipped to anybody else.

2. OKAY, BUT HOW MANY JUMPS ‘TILL I GRADUATE AFF (ACCELERATED FREEFALL)?

There’s more to it than that, however. And there’s more to the jumps than the jumps, as you’ll see when you arrive, coffee in hand, on that fateful Thursday morning. The AFF experience includes a classroom-based ground school, eight levels of mastery and a few more supervised jumps afterward before the student nabs that coveted A-license.

Did you catch that “mastery” bit in there? That’s where the zen lives. There’s a kinda sound-of-one-hand-clapping to the required jump numbers because it’s the mastery you demonstrate on each AFF level that determines if you move on to the next level or repeat the one you’re on. The whole thing depends on your technique, your focus and your determination. Wax on, wax off.

As in any well-run training program of any type, students don’t progress to the next level until they’ve demonstrated mastery of the level with which they’re currently engaged. As there are eight levels within the AFF curriculum, each with a determined set of skills to be mastered and demonstrated, you’ll jump at least eight times (and that’s if you’re a stone-cold natural). Most people jump a couple of times at each level, give or take, but it all depends on you. We set you up for success in the AFF Camp format because the focus is pretty much built-in.

Indeed it does, dear reader. Undertaking the challenge of learning to skydive, even in a program as legendarily awesome as our own, is no small row to hoe. It will require bravery, stamina, and heart, whether you breeze through the program in eight jumps or grit your teeth and take twenty. People learn at different rates and face their unique challenges in different ways.

So: Are you ready to become a skydiver? It may look daunting, but it’s not that big a leap. In your heart, you probably already are. What are you waiting for? Let’s do this thing.

How Many Jumps Before Skydiving Solo: A Quick Explanation

One of the most common misconceptions about skydiving is that you HAVE to start with someone on your back.

Personally, I’ve never had a skydiving instructor attached or holding onto me, but it was my 7 th solo jump that I truly consider my first skydive.

The 2 Ways of Learning to Skydive Solo

No matter where you go in the world, solo skydiving is taught in one of either two courses:

I’ve got a detailed comparison between these two here.

The type of course you decide to do will hold different experiences for you. In my opinion, ‘solo skydiving’ isn’t just leaving the plane on your own.

I would define a solo skydive as when you:

Let’s look at how far along each training course you need to be before you truly skydive solo.

In AFF, you start right at the highest altitude. The idea is that your first jumps are done with your instructors jumping with you and holding on to you on either side (NOT fully attached like in a tandem jump).

4 jumps until getting your first solo skydive isn’t bad at all! From there, AFF quickly progresses into maneuvers and building up more jump confidence.

Now let’s take a look at the more old-school option.

This method takes a very different approach – you jump entirely alone from the start, but with your parachute cord attached to the plane. This opens your parachute immediately, but removes any chance of freefall. 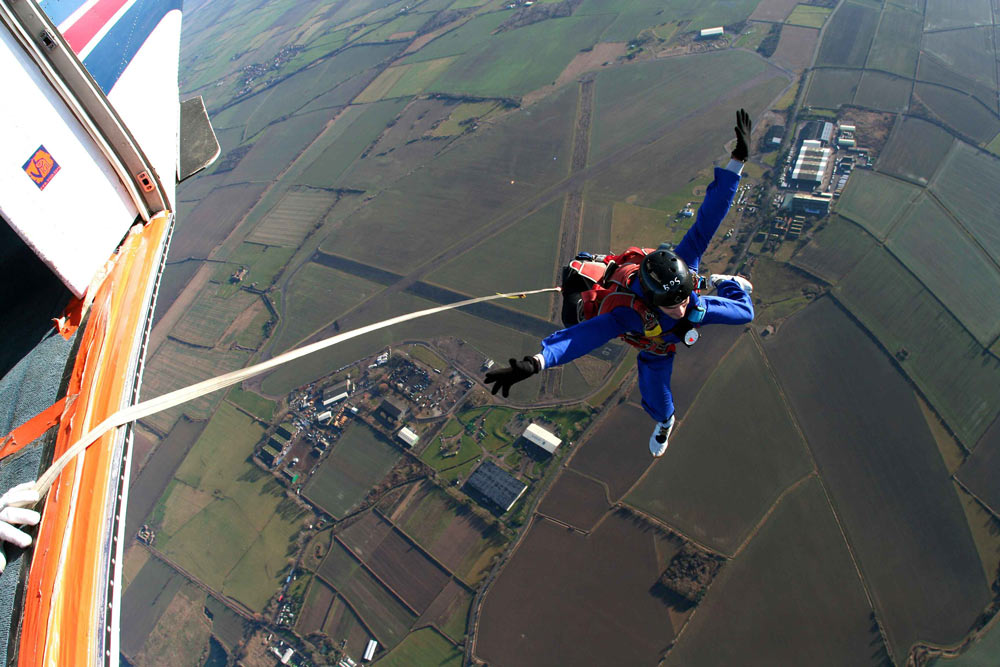 You can see the parachute being pulled out by the static line!

Read Post  Skydiving Health Restrictions – What Are The Requirements?

If you check back to the ‘requirements’ for a solo skydive above, it takes until the 8 th static line jump before I’d consider it a true solo skydive. At least that’s my own experience.

After the 10 second delay comes the 15 second one, and that’s even more intense! Though I’d still consider Jump 8 as ‘ticking the box’ for a solo skydive.

I hope this super-quick article has helped clear up just how many jumps you need before you skydive solo.

This is only my opinion, however! Some would argue that even the very first static line jump counts as a solo skydive, and others say there’s no real difference between a tandem jump and doing it yourself. At the end of the day, you’re still throwing yourself out of a plane!

Whatever the case, I do hope you at least understand how the solo skydiving courses work in terms of getting to that elusive solo jumping level.

If you’re preparing for or thinking about undertaking a course, make sure to check out the related articles below! I’m doing my best to build into a friendly resource for skydiving newbies.

Many first-time skydivers make the mistake of thinking they’ll be jumping out of an airplane alone. but that’s not how it works.

Any novice’s first few plunges will be tandem jumps , where you’re safely strapped to a certified tandem jump instructor. But how many tandem jumps do you need before going solo?

In this post, we’re talking about solo skydiving requirements: everything you need to know to become a licensed skydiver and freefall solo from any dropzone in the world.

Understanding the Tiers of Skydiving Licensing

After you’ve made a few tandem jumps and caught the skydiving bug, you’ll want to study up on the varying levels of skydiving licensing.

Just like any expert invests hours-upon-hours of work mastering their craft, so too do certified skydivers. They go through rigorous levels of schooling and application to earn higher and higher ranks of skydiving status.

There are four tiers of skydiving licensing , including skydiving A through D licenses, each with more advanced instruction.

Good news though. For you to go solo, you’ll only need a USPA A License.

Generally speaking, your USPA A License requirements aren’t too extensive when compared to some of the more advanced levels of jump school (like getting your tandem instructor license !)— but it still requires a lot of studying, training and focus to achieve.

You’ll have to take some skydiving classes and learn the basics, such as:

Read Post  Quick Skydiving Guide: How do skydivers move and breathe in the air? How do they land?

Here’s a sneak peek of the USPA’s A License Proficiency Card .

And that’s just a taste. For how many jumps you need to skydive alone, plus more, let’s look at what the United States Parachute Association lists as its solo skydiving requirements:

That’s right. You’ll take classes, perform graded challenges and have to take a written exam before you can freefall by yourself. You will also need an active USPA membership for any license to remain current.

HOW TO SKYDIVE SOLO: CLASSES

Then, you’re ready for the sky. Your in-air classes are going to vary based on the skydiving center you choose, but if you enroll in the Freefall University here at CSC with our experienced instructors , they can take you through the 7 levels of AFF (Accelerated Freefall) training jumps to learn how to solo skydive. Click each link for a video!

. Achieve stability, pull on your own and land safely.

In addition to these observed 1-on-1 jumps with USPA coaches, you’ll leave with the smarts and skills you need to take your written exam and apply for your USPA A license with confidence.

If you’re ready for solo skydiving, you’re in luck. Our Chicagoland Skydiving Freefall University (Freefall U) can get you trained and certified in no time.

Click the link above to see our course dates and enroll today. 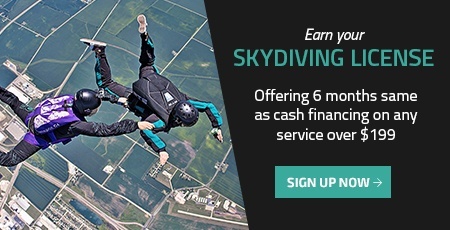 Douglas Smith is CEO/President, and Guest Relations Associate at Chicagoland Skydiving Center. He has owned and operated the business since 2000. He has been skydiving since 1994, and in addition to leading the CSC Team, is currently an instructor, videographer and pilot for CSC.

Stay up to date on the latest news and happenings from CSC and the rest of the skydiving world.