Can You Skydive Through Clouds?

Can You Skydive Through Clouds? 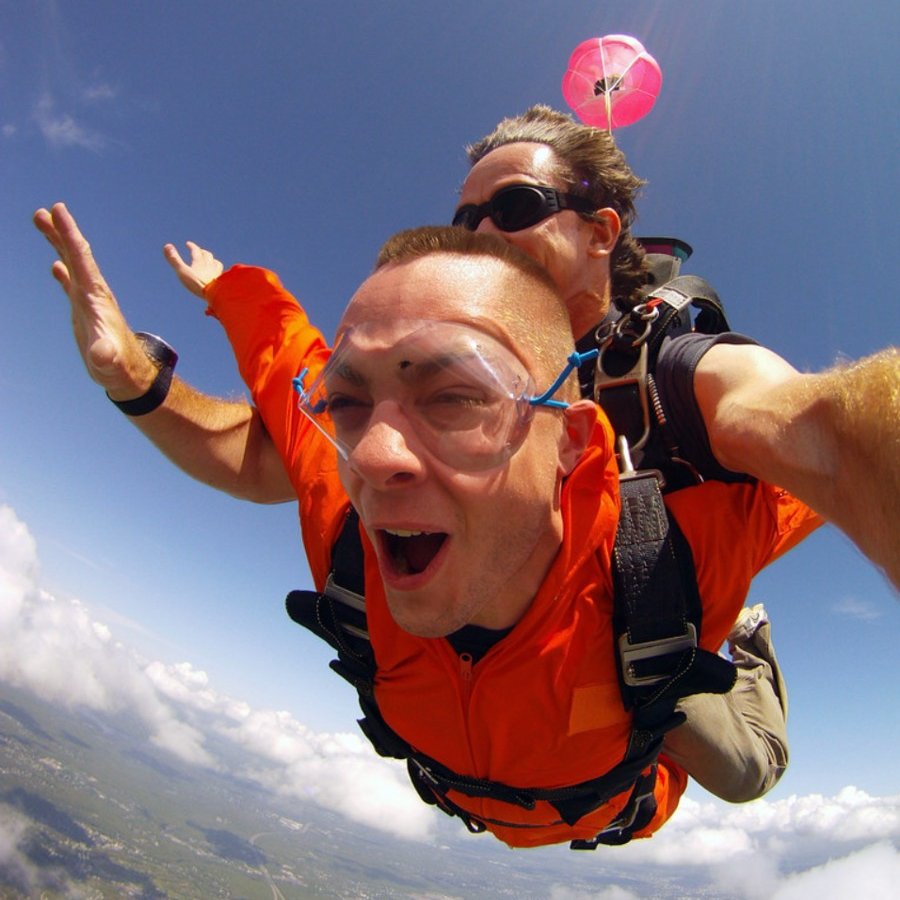 Of those that peer upwards with eyes trained to the sky, most have contemplated just what those big fluffy clouds would feel like. Pillowy soft? Thick and spongy? Or just a puff of gentle cool mist? The debate is still open. But, now that a skydive is on the books, you think it could be the perfect time to find out.

Alas, not so much.

Tempting as it may be to skydive through a cloud, you’re unlikely to get the chance to give it a go. The aviation industry is fairly strict when it comes to skydiving weather conditions, so if it is a cloudy overcast day, depending on the altitude of the clouds, you may not be able to skydive-at least not until the clouds dissipate.

We promise our intention isn’t just to dash your childhood hopes and dreams. Here are three reasons why skydiving through clouds isn’t an option. 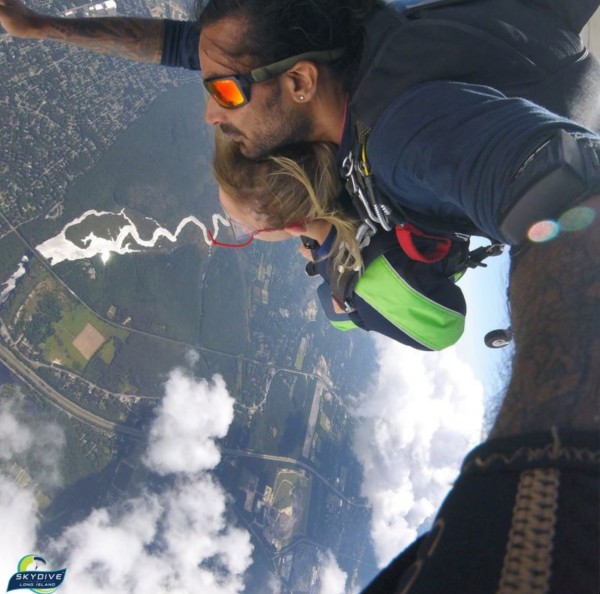 Skydiving, although generally considered a self-regulated activity, still falls under the purview of the Federal Aviation Administration. The rules and requirements put forth by the FAA are codified as Federal Aviation Regulations (FARs). Violations of the FARs are illegal. Specifically, the FAR that governs parachute operations is part 105. For ease of reference, we’ve included an excerpt from the FAR below.

“No person may conduct a parachute operation, and no pilot in command of an aircraft may allow a parachute operation to be conducted from that aircraft- (a) Into or through a cloud, or (b) When the flight visibility or the distance from any cloud is less than that prescribed in the following table:”

1,200 feet or less above the surface regardless of the MSL altitude

In order to stay in compliance with Federal Aviation Regulations, if cloud requirements are not met, we cannot conduct skydiving operations. 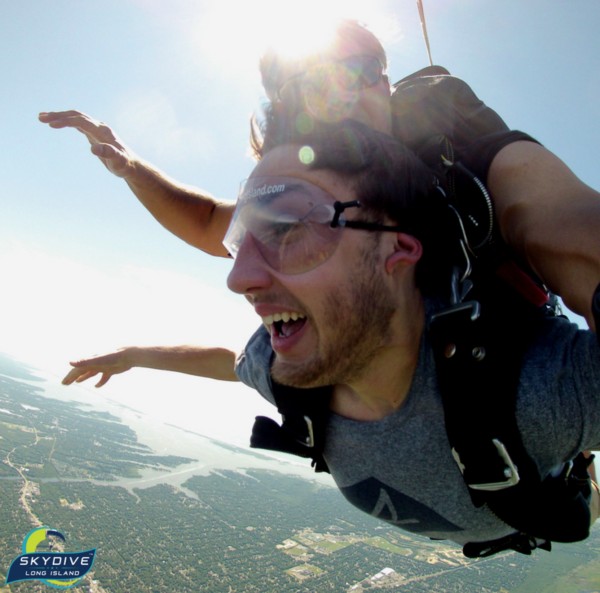 So, what happens if you skydive through a cloud? Well, it could be that nothing happens, or the consequences could be catastrophic.

As you probably recall from middle school science, in essence, clouds are condensed water vapor, much like fog. Analogously to fog, within a cloud, visibility is significantly reduced. Sometimes cloud layers are thin, but cloud layers can also build to cover thousands of feet both vertically and horizontally. If you were to end up skydiving into a cloud, you would be unable to see if it contained other skydivers/parachutes or aircraft. In order to eliminate unnecessary risk and to prevent in-air collisions, skydiving through clouds is not allowed.

A few puffy clouds hanging around in the distance can make for an incredible view. Not to mention, clouds on the horizon can give you an epic point of reference to judge just how quickly you’re zooming through the sky. But just a solid sea of gray? Honestly, it’s a whole lot less visually stimulating and a lot less fun.

Trust us, when it comes to the adventure of a lifetime, it’s better to wait for the right skydiving weather conditions than to settle for a lesser experience. 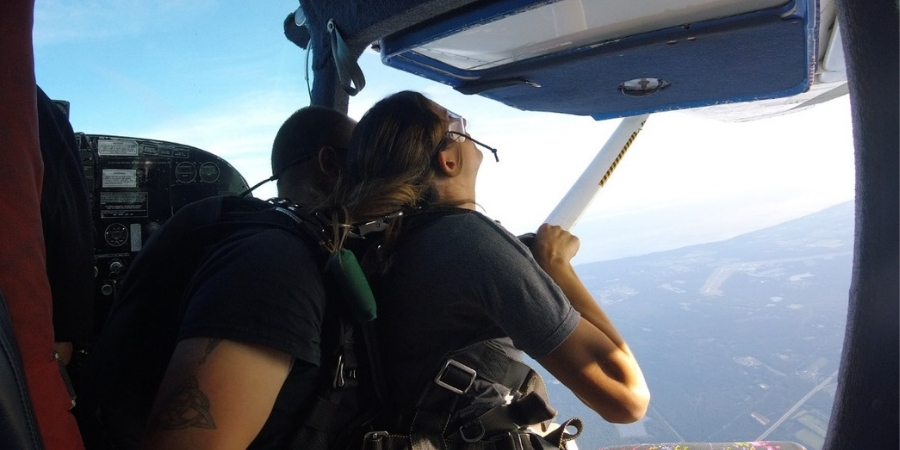 Unsure of what the weather has in store on the day of your jump? Check out the Skydive Long Island weather forecast.

Imagine, the colorful parachute blossoming overhead. It’s slowing you down from freefall to a mere 15 mph or so, to float you to the ground. If you were anything like us, we wondered – after that brilliant parachute opening – how it was possible to get to the ground for that inevitable parachute landing. 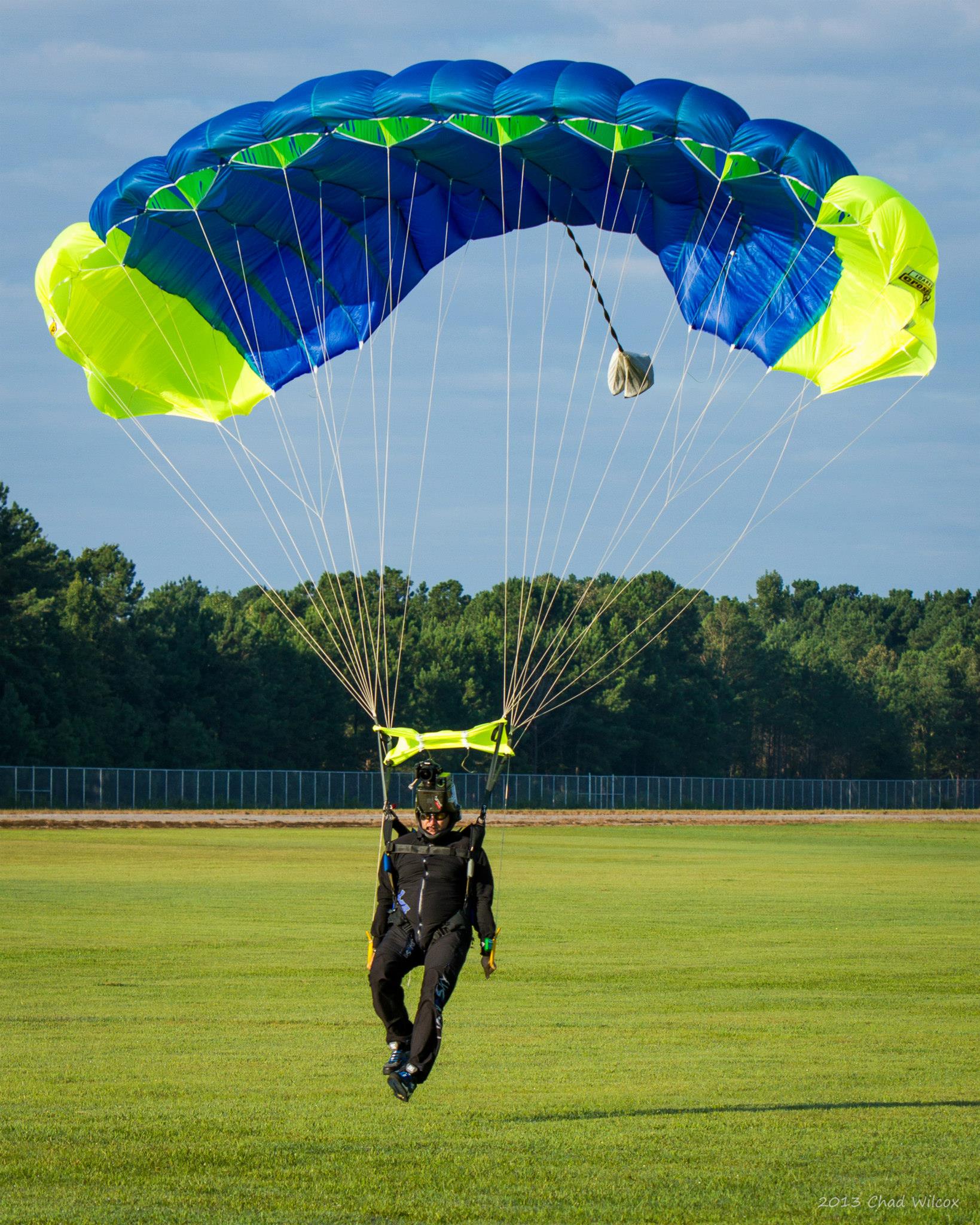 Thankfully, parachute technology and design have come a long way since the early days of round parachutes that didn’t have much steering capabilities and harder parachute landings. Which is why skydivers would use the parachute landing fall technique to land.

Today’s parachutes are rectangular in shape and have several air pockets called cells, that trap the air inside to keep the parachute inflated, using ram-air principles. Attached to the parachute fabric are lines that extend and attach to the harness. One set of lines are attached to the back of the parachute, all the way down to the jumper, so the skydiver can steer. If you pull a toggle, it tucks the back (or tail) of the parachute, cupping the air and moving it towards that direction. Simply put, if you pull the right toggle, the parachute will turn right and visa versa. 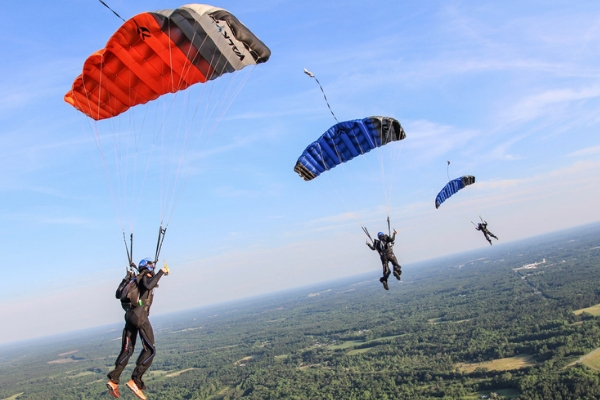 Jumpers usually deploy their parachutes at appropriate heights to their skill levels, and for safety. Highly experienced jumpers deploy around 3,500 feet or above, while students generally deploy around 5,500 feet. Why is that important? Because a jumper needs the altitude to check for a properly working parachute, then prepare for the parachute landing.

Inevitably, every jumper will prepare to enter a parachute landing pattern. The landing pattern is made of three legs similar to how airplanes follow a systematic approach to come into land on a runway and ultimately aim to land into the wind. The legs consist of: downwind, crosswind, and final approach. 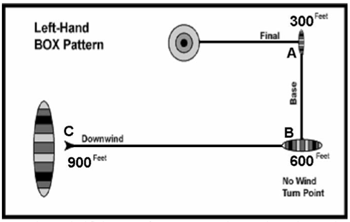 As we said, the parachute has a forward velocity of about 15 mph, when you land into the wind, it slows the jumpers descent for the parachute landing (however, it is ok to land downwind if it’s pre-planned or safer than making a turn too low – when you learn to skydive, your instructor will teach this to you).

The last 15 seconds of descent is the most crucial for a parachute landing. All the planning for the last 15 seconds begins before even boarding the airplane – noting the wind direction and speed, knowing the landing pattern direction (some skydiving centers may have all left turns to final approach and others all right turns), and deploying the parachute at the appropriate height to initiate the plan.

Read Post  GoPro for Skydiving: Can I Bring my Own? 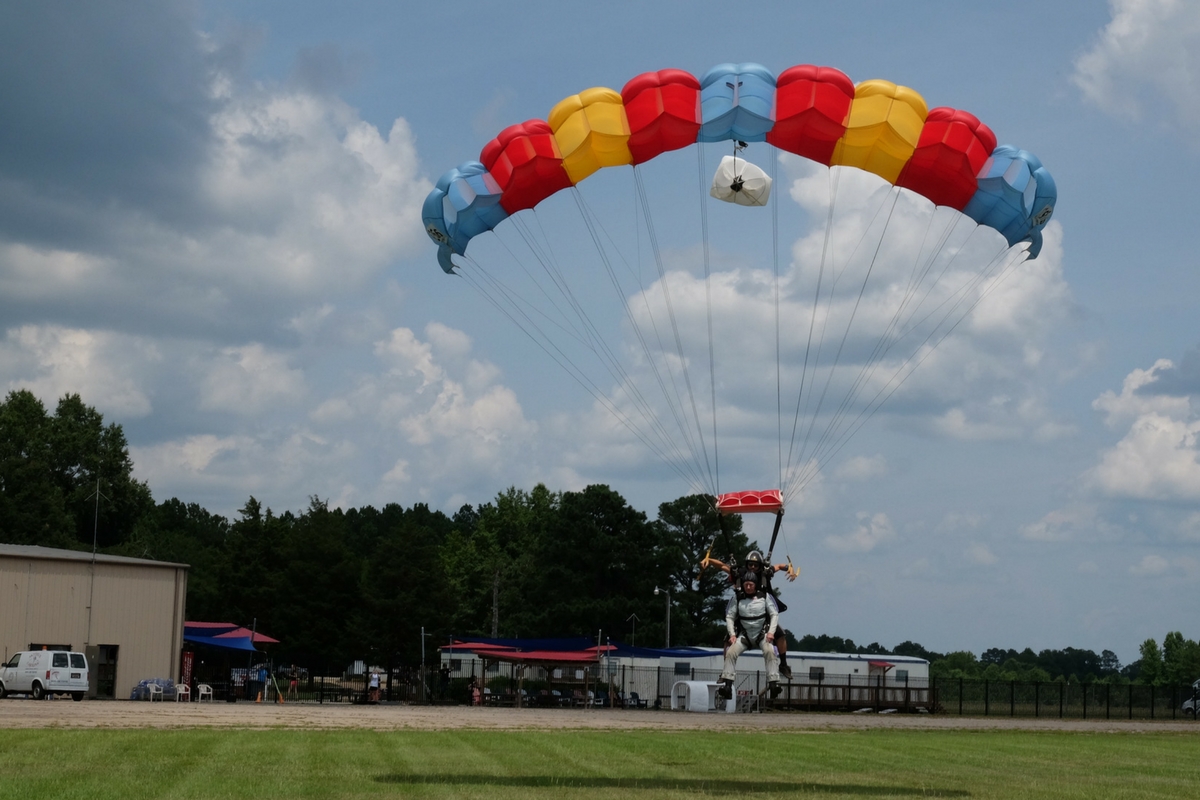 Are you ready to touch down at Skydive Carolina? We’re ready to show you all about the parachute landing and more about this great sport! Click or call us today!

How to Survive Falling Without a Parachute 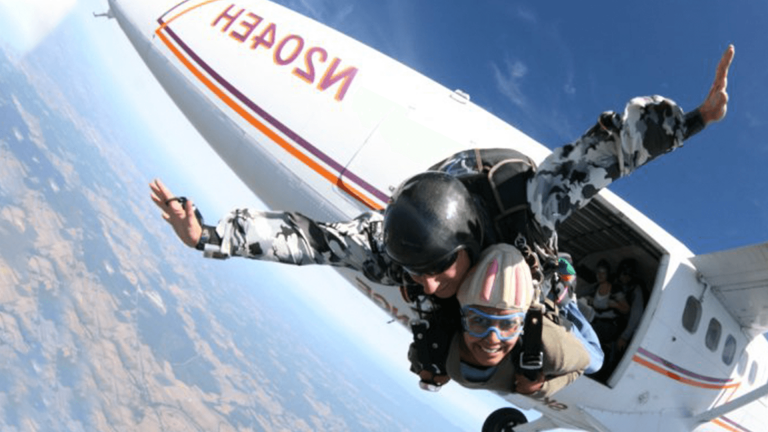 But as you jump out of the plane, and see how beautiful the Earth looks below you, you start to think that this might not be so bad. Then you pull the cord to open your parachute, and all your worst fears come true.

There’s no parachute coming out, and now you’re plummeting towards the ground at about 200 km/h (125 mph). You’ve only got about a minute before you hit the ground. Is there anything you can do to save yourself?

Here’s how to survive a fall without a parachute.

Every time your life depends on a parachute, there is a one in 1,000 chance that it won’t work. But a malfunctioning parachute isn’t necessarily a death sentence.

According to skydiving experts, the secret to surviving is all about how you react when the parachute fails. How should you position your body? Is there anything you could do to slow down your fall? And why could landing on a roof be better than landing in a big body of water?

Just like most survival situations, the best thing to do is to slow everything down. Slow down your breathing to avoid hyperventilating, slow down your thoughts so you can focus, and slow down the speed of your fall so you don’t splatter on the ground.

To do that, you’ll need to spread out your body into an x-shape. Spread your arms and legs, point your chest toward the ground, and arch your back and head upward. This will create more air resistance, and slow your acceleration, giving you time to choose where to land.

Although the giant pool of liquid below you might look like a more appealing landing spot than the solid ground, it would probably be just as deadly. Like concrete, water doesn’t compress, so landing in a lake would be just like landing on a sidewalk.

Sure, you could position yourself to reduce the impact, but even then you could still be knocked out cold. And being unconscious underwater does not help you survive, so let’s find somewhere better.

Step 3: Direct Yourself to a Better Landing Spot

To move sideways through the air, away from the water, and towards a safer target, you’ll need to use a skydiving technique called tracking. Bring your arms and legs in against your body to steer it as you fall.

Your three best options for landing spots would be a swamp, snow, or trees, because they would all extend your deceleration time and help you slow down. If you were to land on solid ground, your body would decelerate from its falling speed of 200 km/h (125 mph) to 0 km/h in half a second, hitting you with enough g-force to kill you instantly.

But if you were to land somewhere that provides more cushioning, you could extend that deceleration by a couple of seconds, which would significantly reduce the g-force, and give you a better chance of surviving. If you can’t see a swamp, snow, or trees anywhere nearby, then your next best option would be to look for something big to break your fall, like a rooftop, or a bus. These structures are not very strong, so when you hit them, they’ll break and absorb some of the energy of your fall.

Step 4: Land on Your Feet

Okay, so now it’s the moment of truth. You’ve chosen your target landing spot, and now you’ve got to hit it. The best way to do this would be to point your toes toward the ground, and land on the balls of your feet. I know what you’re thinking. “That sounds painful!” And you’re right, it will be.

But the idea is that your body will have more time to slow down if you land feet-first. The long bones in your legs will absorb a large amount of the impact energy before they fracture. Essentially, you’ll be sacrificing your legs to protect the rest of your body.

Just before landing, put your head down, with the fingers of each hand locked together behind it, and point your elbows in front of your face, to protect your head and neck from impact. The main reason why people die from falling off tall buildings and bridges is severe head trauma.

Even if you do everything else right, if you end up bouncing on your head when you land, you won’t survive.
So quickly, get into position. That should be all you need to know. Now comes the hard part. You need to figure out where you are, and get help as soon as possible.