How to measure water visibility when scuba diving

How to measure water visibility when scuba diving

Visibility is one of the most subjective aspects of diving. Ask 10 people after a dive what they think the visibility was, and you’ll get 9 different answers. The last person will spend a half hour trying to guess. People generally suck at estimating visibility (“viz”). Why is that? I think it comes down to a lack of common definition. I will attempt to define visibility in concrete terms.

The best place to start for this sort of thing is the dictionary. Webster’s defines visibility as

The distance at which something can be seen.

That was the easy part, now comes the hard part. How do we measure viz? Believe it or not, there is an established manner. It requires something called a Secchi disk. The disc is attached to a line and gradually moved from the measurer. The distance where the disk cannot be seen is recorded, with the length of the line being the visibility. Even more advanced methods with higher precision exist using photometers.

That’s nice for Jacques Cousteau, but not for Joe Diver who doesn’t have a Secchi disk on hand.

First of all, don’t feel bad. Viz is hard to guesstimate, but gets easier with experience. Even then, in general a range is a better indicator for estimating viz rather than a hard, fixed number. Try to get the lower end where things get blurry and the upper end where things can no longer be seen. As you get better with distances, this range will get smaller and the “true” viz will probably lie somewhere in between.

One rule with measuring viz for scuba: it measures horizontal distance. Vertical distance can be deceiving, as light from the surface increases visibility. However, it can be useful both for an upper bound on your range (vertical viz will always be higher than horizontal) and for estimating distances, since you always know your depth. Some, as a rule of thumb, define the viz as the vertical visibility (the depth where you can no longer see the surface) minus 3 m / 10 ft. Probably a good guideline, but useless in most of the tropics, where the viz always exceeds the dive depth.

Try to use anything you have to your advantage. Length of a wreck, for instance. You can find this out easily and use it to gauge distances more accurately.

I’ll let you in on a secret: it doesn’t really matter. Viz is cool for bragging (“We could easily see over 100 meters!”), but there aren’t too many practical reasons where an accurate number is necessary. There are exceptions, however. For instance, a photographer probably cares more so than others, since the equipment they take can depend on these numbers.

In general, ranges are fine, and even broad descriptions sufficing as well. A scale that goes something like amazing -> great -> good -> ok -> where’s my buddy? -> I can’t see my hand, is descriptive and covers most situations. Make an educated guess, compare to the guesses of others to refine your estimation abilities, but don’t get too hung up on the ever-elusive viz. 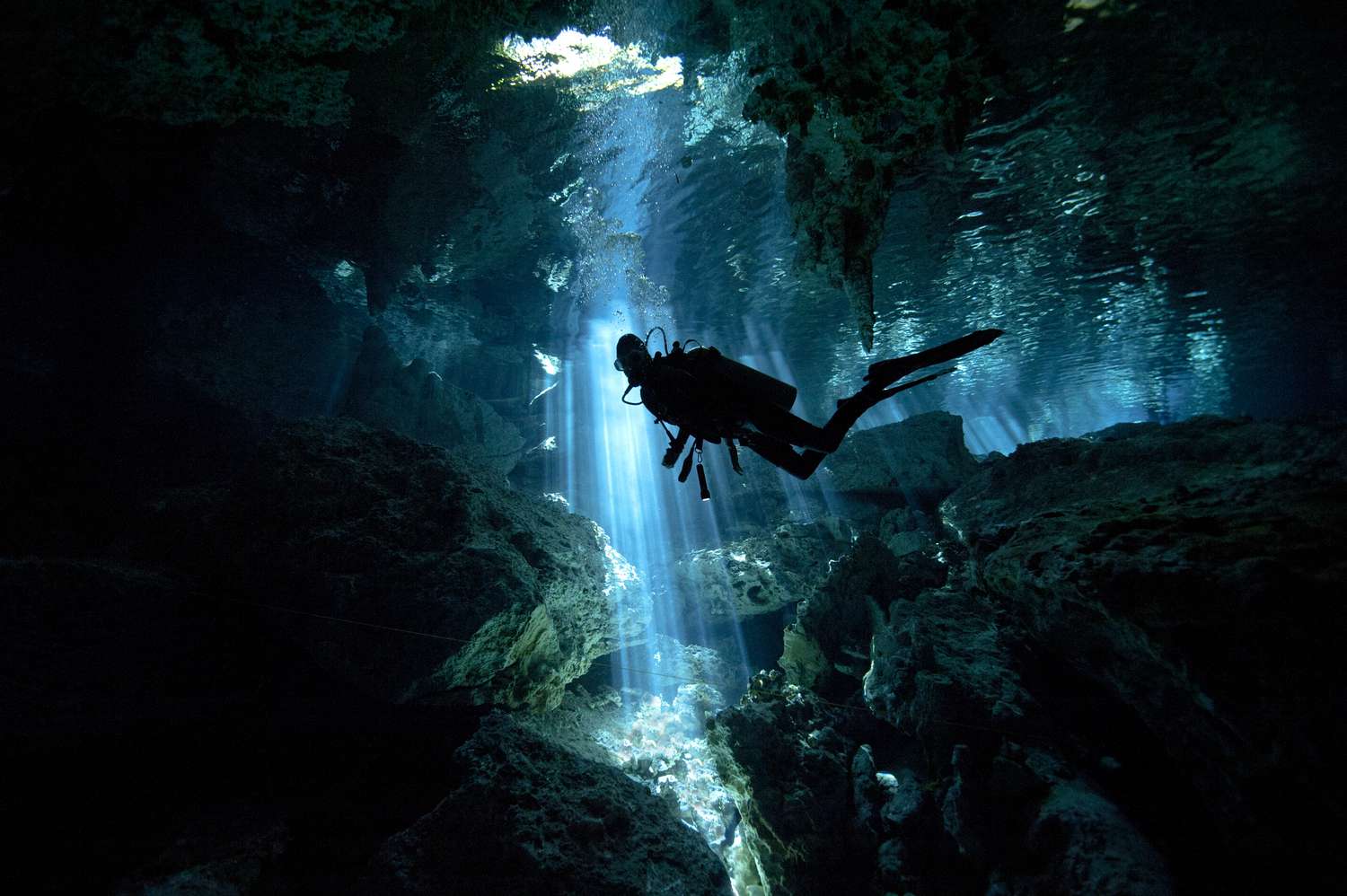 Put simply, in diving terms, visibility is an estimation of water clarity and is defined as the distance a diver can see horizontally. Many divers abbreviate visibility with the slang term “viz.” Visibility is given in units of distance, such as “50 feet of viz.”

What Are Factors That Affect Visibility Underwater?

1. Particles in the Water

Suspended particles of sand, mud, clay, or other bottom sediments affect the visibility underwater in much the same way as fog effects visibility on land – distant shapes become colorless, poorly-defined shadows. Visibility reduction caused by suspended particles may be slight or severe depending upon the density, type, and amount of sediment suspended in the water. As an example, clay sediment will become suspended easily, will reduce the visibility to nearly zero feet in a few moments, and will remain in suspension for many hours. In contrast, sand does not become suspended as easily as clay, rarely reduces the visibility to zero, and will fall out of suspension in a matter of minutes.

Sediment particles become suspended when they are disturbed by water movement or by divers. Natural causes of water movement that forces particles into suspension include currents, wave action, choppy seas, runoff, and rough weather. A diver can stir up bottom sediments and reduce visibility by using improper kicking techniques, by swimming with his hands, or by landing on the bottom (one of the many reasons these actions are discouraged).

Water of different salinities forms distinct layers in a manner similar to that of olive oil and vinegar. The interface between the two layers is called a “halocline” (halo = salt, cline = gradient). When viewed from above, an undisturbed halocline resembles a shimmering underwater lake or river (an effect caused by the variation of refractive properties with salinity). However, when water of different salinities is mixed, the visibility becomes very blurry. Divers have compared the visual effect of swimming in a disturbed halocline to having lost one contact lens, to being inebriated and unable to focus, and (my favorite) to swimming in Vaseline. The loss of visibility in a halocline may be extreme; a diver can see light but cannot distinguish shapes. In some cases, a diver in a halocline may even have difficulty reading his gauges!

Haloclines are encountered in estuaries, at springs that empty into the ocean, and at inland caves and caverns. A diver may also observe the blurry effect of mixing fresh and salt water near the surface of the ocean during a rainstorm, as the fresh rainwater mixes with the ocean’s salt water.

The term “thermocline” signifies a temperature gradient (thermo = temperature and cline = gradient), or a level at which water of two different temperatures meets. Water of different temperatures layers similarly to water of different salinities, although the effect is not as pronounced. Colder water is denser than warmer water and sinks below it. Therefore, divers will typically encounter increasingly cold layers as they descend. When the temperature difference between two water layers is extreme, the interface between the two layers looks “oily” (similar to a halocline). In general, the visual disturbance created by different water temperatures is not great, and a diver quickly passes through the thermocline region as he ascends or descends, hopefully enjoying the pretty visual effect.

Read Post  From Reeds To Regulators: The History Of Scuba

Bacteria or algal blooms can disturb the visibility in a very dramatic way. A typical place to encounter this sort of visual disturbance is a body of fresh water with little or no circulation. Algae and bacteria usually require very specific conditions of temperature, salinity, and light, and may be present only seasonally. An example is Cenote Carwash in Mexico’s Yucatan Peninsula, where an algal bloom is present only during the warmer months. The algal bloom forms an opaque, greenish cloud extending from the surface to about 5 feet. Divers must descend through the cloud in near zero visibility before reaching the crystal-clear spring water of the cenote. The presence of organic particles may also be indicative of pollution.

The Take-Home Message About Visibility 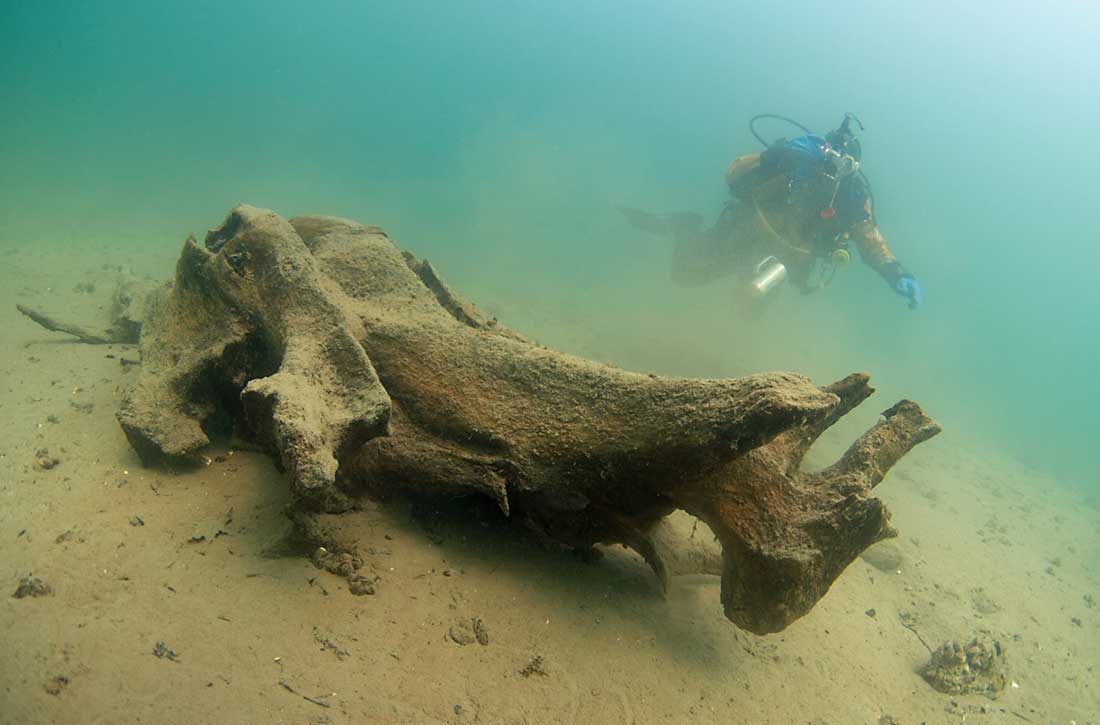 Disclosure: We are reader supported, and earn affiliate commissions If you find a good deal on DIVEIN, you click to the retailer, and you buy the product, we get a commission of the sale. That’s is how we pay ourselves. It does not make the product pricier for you. when you buy through us. 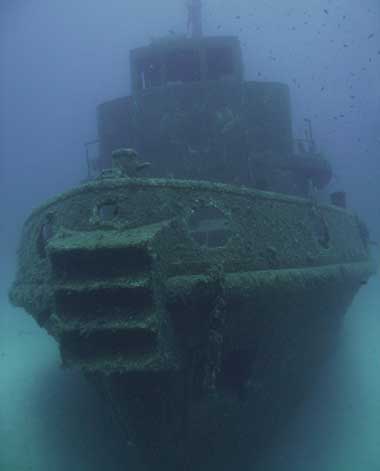 Would you know what to do if you get caught in a silt-out with almost zero visibility?

Silt-outs are what happens when we kick up the fine sediment that we often find in enclosed underwater areas, such as inside wrecks or caves, as well as sometimes on the bottom of open water as well, and in particular in lakes.

Silt is technically a type of granular material that is finer than sand and is often light and dusty in feel when dry, much like the type of flour used for baking, and with a more slippery feel when wet.

As it is very light, it is easily disturbed by movement, either from waves, current, or a diver’s body or equipment.

It is often carried by water currents and accumulates inside enclosed areas that are protected from currents, which is why we very often find it in caves and wrecks.

The fact that it is easily disturbed is what can create a silt-out.

A silt-out happens when someone touches or kicks up a large amount of silt, degrading the visibility to often zero.

Inside a silt-out, you can literally not see your own hand in front of your eyes. 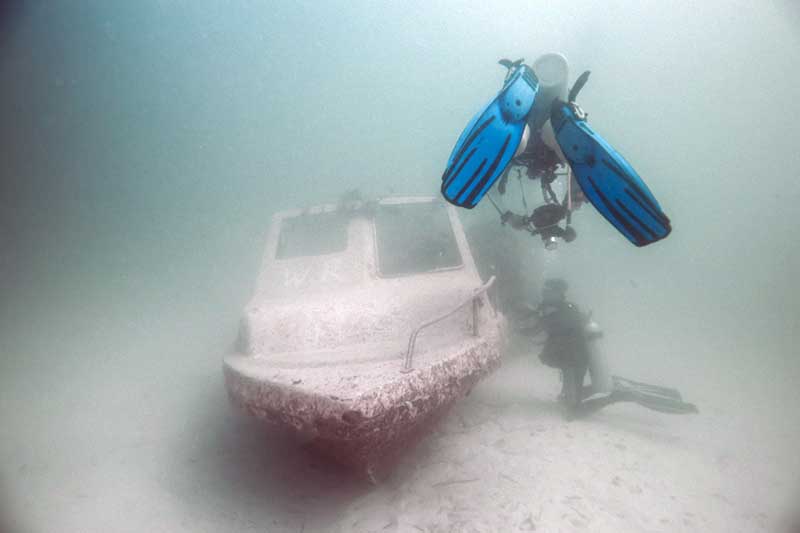 Silt-outs tend to happen near bottoms and inside wrecks or caves.

Because the visibility decreases instantaneously to next to nothing, it can cause uneasiness or panic in divers, even experienced divers.

It can cause uncontrolled ascents, or, if near a drop-off, descents, as well as buddy separation.

Inside enclosed water spaces, it can be fatal, as was demonstrated only too well a few years ago in the Grotto Rosso in Italy, where a group of divers, including their guide, drowned inside the cave after becoming disoriented following a silt-out.

With no visibility, it is hard to find your way out of a wreck or a cave, which can cause panic, which in turn leads to more frantic movement patterns, worsening the silt-out. 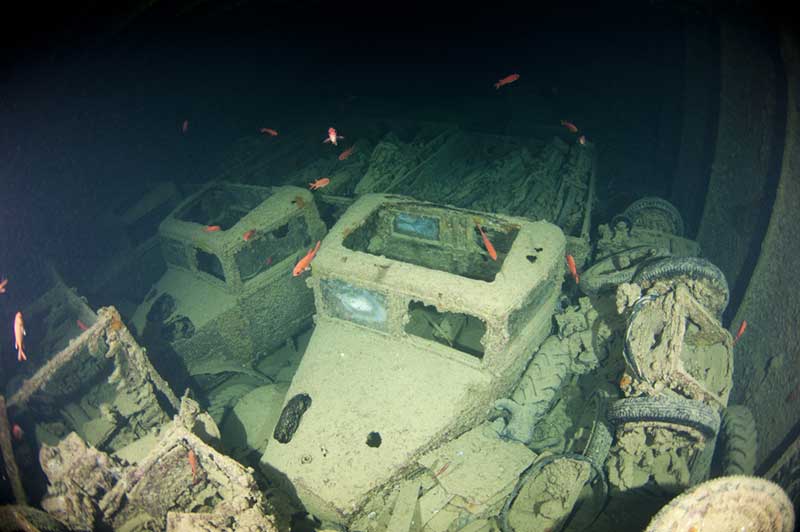 The best thing to do about silt-outs is to avoid them altogether.

Your finning technique, buoyancy, and trim are critical in this respect.

The preferred finning technique in areas where silt is present is the bent-knee cave diver kick, and of course, good buoyancy control will mean that you don’t accidentally hit the bottom (or the ceiling of a cave or wreck, where silt also can be lodged).

Trim, the ability to stay level in the water, will help keep your legs and fins off the bottom, where it can disturb the silt.

We’ve already covered finning techniques and buoyancy in other articles here on DIVEIN.com. 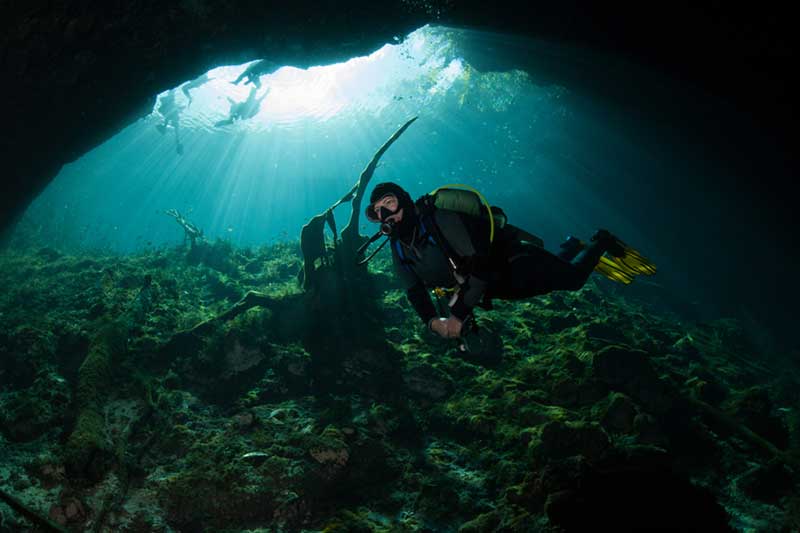 Whenever you head into a cave or wreck, you should always have adequate training, and make sure you bring a powerful dive torch (which can help cut through the silt, offering some orientation), as well as a line attached outside the entrance to the cave or wreck.

This will allow you, in case of a silt-out, and you are diving in low visibility, to follow the line back to safety.

Get out of a silt-out

Should you find yourself in the midst of a full-on silt-out, there are a number of things you can do to get out safely.

2. Maintain your depth. This won’t be a problem if you’re in a fairly small area, such as inside a wreck’s living quarters, but in large cargo rooms, or inside large caves, it can be trickier, and in particular in open water. Notice any pressure changes in your ears from increasing or decreasing pressure, and try to bring your dive computer or depth gauge close enough to your eyes to read it.

3. Make your way our carefully. If you’re in open water or have enough room overhead, try ascending slowly using your BCD until you come out of the silt cloud. Be careful you don’t ascend too fast, as the silt-out can make it hard to discern your ascent rate.

One final tip: keep attention to your bubbles. It is in fact possible to be disoriented enough in a silt-out to not be able to tell the difference between up and down.

But thankfully, bubbles always rise, so noticing which way your bubbles go when you exhale can help you keep your bearings.

If you ascend too fast.

BEST DIVING IN DOMINICAN REPUBLIC IN 2022

What Is The Purpose Of A Scuba Tank?