Bungee Jumping vs Skydiving: My Own Comparison

For me and many others, bungee jumping is the scarier of the two. Because you’re jumping from a low height, your brain knows what’s going on (and is terrified!). Skydiving is less scary because you’re so high up. It also tends to be more fun and a fuller experience.

That’s the short answer, anyway. The quick bungee jump answer rather than the full skydive.

If you’d like to learn the full comparison, I’ve compared skydiving and bungee jumping on just about every aspect below. With my own experience in both included at the end.

Ready? Then let’s dive in.

The best way to compare just about anything is to do it aspect by aspect. So here we go!

Bungee jumping feels like the biggest normal jump or dive you’ve ever done, times 100. It’s a fast, super-intense rush. You get the massive feeling of butterflies in your stomach as you jump, and it builds and builds until the rope finally catches you. It’s a crazy ‘rush’ and your brain just about flips out as to why you’ve just thrown yourself off a bridge or building! 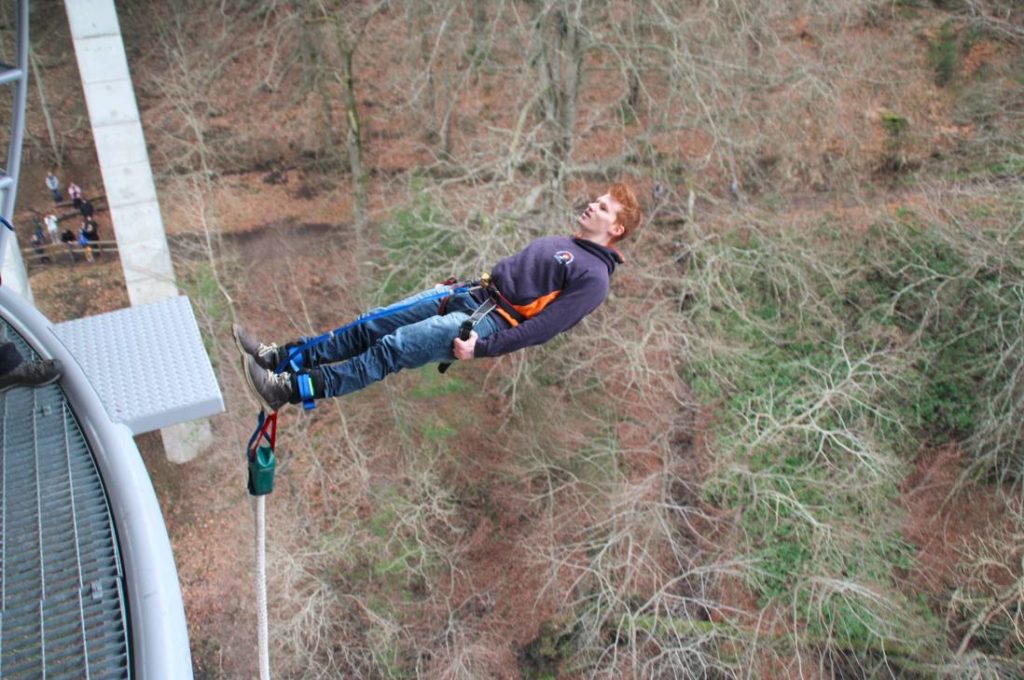 Introducing the air-plank. I was lucky enough to get this snapped while going off backwards!

On the other hand, skydiving feels more free. You don’t get the butterfly feeling in your stomach. Instead, it’s more like you’re flying. The biggest feeling is the air rushing past you at 120mph (like sticking your head out of the window on the highway). Most people find it more enjoyable – almost relaxing – than the RUSH of a bungee jump.

I’m often asked which is scarier between bungee jumping and skydiving.

Almost everyone reports that bungee jumping is much scarier than skydiving – even if the idea of skydiving is the more intimidating one.

I believe bungee jumping is scarier because our brain understands what’s happening. It knows you’re standing on top of a tall objects. It’s apprehensive about what the hell you’re doing there. And it goes crazy when you actually jump off!

Since bungee jumping is essentially a massive dive, we can recognize the experience and be appropriately terrified about it.

On the other hand, while still scary, skydiving doesn’t induce such a natural panic. It’s more of a bizarre feeling. By the time you’re thousands of feet in the sky, you’re too high for your brain to understand what’s going on.

With any extreme sport, safety is always the first consideration – and the most asked about.

The short answer is that both skydiving and bungee jumping are extremely safe. They wouldn’t be so popular if they weren’t!

Bungee jumping in particular is extremely safe – especially in a country with regulations. The fatality rate for bungee jumping is around 1 in 500,000, which are most likely freak accidents. The equipment is so over-engineered that you’re in no danger. Just make sure you’re clipped in and you’ll be fine!

Skydiving is also extremely safe. However, since people can be more silly with it than bungee jumping, there are more fatalities reports. The fatality statistics for skydiving are around 1 in 100,000, and it’s getting lower every year:

The thing with skydiving is that many fatalities come from people pushing the edge of the sport, or just taking silly risks. When it comes to tandem skydiving, there hasn’t been a single death report in over 750,000 tandem jumps since the year 2000, in the UK. (Data available at the bottom of the page here).

As you might imagine, bungee jumping is a fair bit cheaper than skydiving. Costing anywhere between $40-$80, it’s not dirt cheap but it’s a small price for a wild experience!

Skydiving starts off as more expensive. Especially for a tandem jumper, you’re looking at hundreds of dollars for a jump. That said, you are getting so much more for your money.

Similarly, the training costs of learning to skydive solo aren’t cheap. A static line course costs similar to a tandem jump, and AFF has a real price tag attached to it.

HOWEVER – and yes that’s a big however – skydiving does get affordable once you’re licensed, insured, and have your own kit. You can find yourself hurtling through the sky from as little as $40!

I alluded to this above, but there’s a real difference in the experience you get with these two sports.

Bungee jumping is a fantastic morning or afternoon out. You turn up, get a quick briefing, and before you know it you’re diving off a bridge. The drop lasts 3-6 seconds, followed by some joyful springing up and down. Then you’ve gotta awkwardly hang there until they can send down another rope to reel you back in!

Bungee jumping is short and sweet, though you can easily do multiple jumps and it’s not weather dependant.

Skydiving, on the other hand, is a whole different beast. I’d say the experience starts days in advance, when the nerves set in, you start planning – maybe even reading cool blogs like this one! – and getting mentally prepared.

The day itself depends on your jump, but it’s a full day out. While you wait around you can kick back and watch the experienced jumpers dive through the sky and swoop around under their parachutes.

Your skydive itself has so many incredible aspects to it. You get to fly in a cool plane, freefall for way longer, experience terminal velocity, glide under a parachute, and see some of the best views of your life.

If you do some training to jump solo, you also tend to make friends at the airfield, learn how parachutes are packed, and begin your journey to become a licensed skydiver (aka an absolute legend). 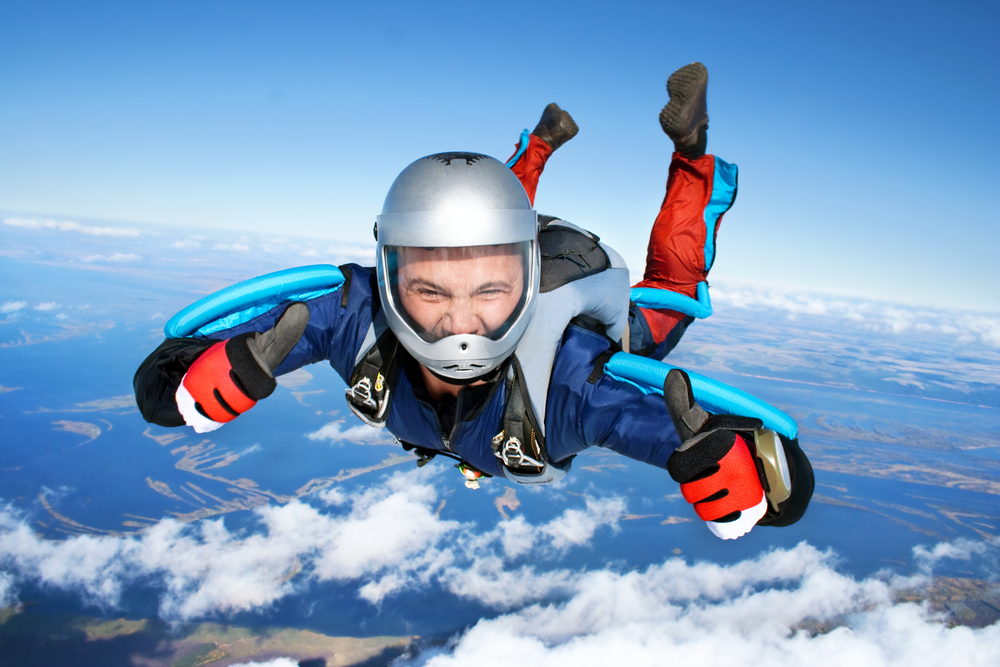 By accessibility I don’t mean wheelchair access (though I believe this is possible in both sports!). I mean ease of access.

For example, bungee jumping is great when travelling. There’s some really scenic locations out there, and it’s easy to book in to get a jump. It doesn’t need much forward planning.

Skydiving – especially for beginners – is more rare, and tandems need booked well in advance. That being said, a skydive is an incredible way to see a country from a very unique view.

If you get a skydiving licence, suddenly travelling becomes one of the best aspects. You can turn up to almost any airfield and jump there, meaning you unlock what’s called a ‘Skydiving Holiday’. Travelling to go and jump in different places around the world.

Skydiving also has much more depth than bungee jumping. Once you’ve mastered basic jumps, a whole world opens up. Freestyle skydiving, wingsuits, jumping with friends, competitions – there’s so many areas to explore.

The last thing I want to touch on in skydiving vs bungee jumping is the communities.

A skydiving drop zone is full of people who have one thing in common. That’s right – they’re all a bit crazy! While there’s always some big ego jumpers, most skydivers are incredibly friendly, welcoming, and want everyone to have a good time.

An airfield on a clear day has everyone buzzing with emotions. There’s first time jumpers fearing for their lives, their friends and family watching on, instructors looking after them, and of course the experienced jumpers just having fun. With such high emotions and energy, you often get the best side of people. A drop zone really is a community where you can easily connect with anyone there.

On the other hand, bungee jumping centers are more of a business. It’s typically run by a crew who – while they love their job – are simply briefing people then helping them jump as a full-time job. It tends to be more of a business, where the staff are helping you through a great experience, rather than being there with you.

At the time of writing, I’ve bungee jumped 3 times and skydived a few dozen.

It’s safe to say I can absolutely recommend both! Bungee jumping was a fantastic day out both times I went, and it was great excuse to raise some money for charity. It’s more of a quick fun rush, which is a lot of fun to do with friends and share the experience.

On the other hand, skydiving is something I’m practically in love with. While I wish I could go more, it’s a very deep and full experience. Not only does it have all the big and crazy aspects of jumping from a plane, but equally it’s quite serene. There’s something amazing about flying through the air, gazing at the most incredible views beneath you. 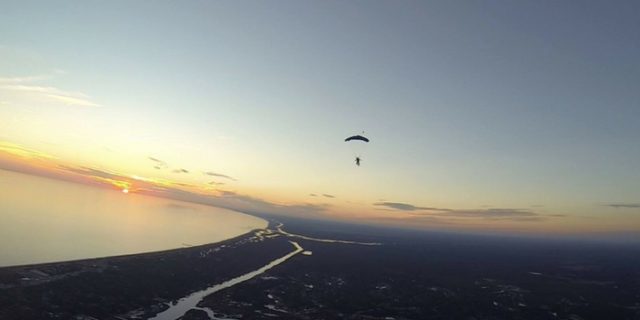 Nothing beats relaxing alone in the sky, taking in the views. Source: Skydive Carolina

Personally, you can’t beat the stillness of the moment after your parachute opens, you’ve just flown through the air, and you’re now sitting the sky and it’s perfectly quiet. Only the light sound of your parachute floating in the wind.

That’s just my take, though. I know other skydivers love the adrenaline rush, and an open parachute to them just means a chance to do some wild turns!

To touch on other people’s opinions – most skydivers I know have bungee jumped, and share the same views I do. It’s great for a quick day out, but we’d take skydiving over it any day!

Bungee jumping and skydiving are both incredible popular, and for good reason.

If you’re weighing up between these two options, I hope this quick comparison has helped make things a bit more clear for you!

My recommendation is, of course, to try and do both ?

If this guide’s helped you, please consider checking out the related articles below. 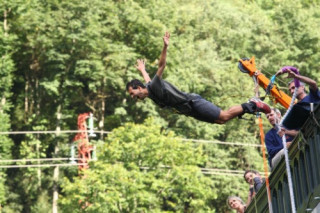 Taking that leap of faith from either a plane or a ledge might feel similar to one another at first. After all, looking over the precipice, especially for first-timers, is certain to get the heart-pounding! However, there are some pretty big differences between the two events after you sort through their surface similarities. Here are some of the key elements of each to give your inner thrill-seeker something to get excited about!

The Differences Between Skydiving and Bungee Jumping

There are three main differences between skydiving and bungee jumping: time, altitude, and failsafes. You will need to make a conscious decision to take the leap in both cases, which is what makes such experiences so rewarding in the first place. The fears you overcome by not backing down and taking that single step can be a transcendent experience. However, the similarities come to an end here.

Skydiving vs. Bungee Jumping – What Does Each Feel Like?

The biggest differences between the two activities are the sensations you’ll experience. Skydivers will reach speeds of approximately 120 miles per hour, which will put you in a state known as “terminal velocity.” This is where you are moving so fast that you’ll be riding on the air molecules and eventually won’t feel speed or descent. It feels like you’re floating!

When you’re bungee jumping, you will not be able to reach terminal velocity. Therefore, you will feel unstable during the whole experience. This is one of the reasons some people feel more disoriented and out of control during bungee jumping vs. skydiving.

Skydiving vs. Bungee Jumping – Which is Scarier?

As mentioned above, the lack of control when bungee jumping can make the experience a little scarier for some people. After all, there are also no failsafes when bungee jumping. It’s ironic, especially for those who are intimidated by heights, that skydiving feels more approachable despite taking place at a hundred times higher altitude!

Is Skydiving Better than Bungee Jumping?

Both are great activities for thrill-seekers, but in the end, bungee jumping cannot compare to the overall experience of soaring into the sky to cut through the winds with your body before gracefully floating back to earth. Bungee jumping is a fun and exhilarating experience, but a contest of skydiving vs. bungee jumping, skydiving wins hands down in our book!